The precision and accuracy of routine Electron Backscatter Diffraction (EBSD) analyses are constrained by many factors, including sample preparation, analytical geometry, EBSD pattern quality and the band detection / indexing technique. The accuracy of the technique (i.e. how well the orientations are measured with respect to a sample reference frame, such as the rolling direction) is relatively poor (probably ~2° in most cases), due to inaccuracies in the cutting, mounting and tilting of the sample. However, the angular precision (sometimes referred to as the angular resolution) of EBSD is significantly better; often quoted as between 0.5° and 1° (e.g. references [1] and [2]). Fundamental to the EBSD technique is the method of identifying and locating the Kikuchi bands, and the selected band detection method is one of the main factors determining the measurement precision, as described in the Tru-I indexing page.

To achieve the highest precision misorientation measurements (for example to characterise subtle subgrain structures, or to resolve the strain around individual dislocations), Oxford Instruments has developed a band refinement approach called “Refined Accuracy” [3], [4]. This approach recognises that Kikuchi bands have varying widths and have hyperbolic (curved) edges, in contrast to conventional Hough transform based band detection that assumes that Kikuchi bands are straight lines. The Refined Accuracy approach involves 3 stages:

This final stage of refinement is illustrated in the figure on the right. 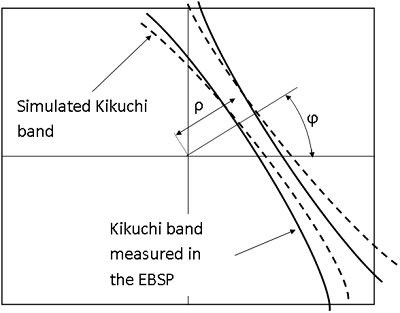 Sketch to illustrate optimising the fit of a single, simulated Kikuchi band to the real, measured Kikuchi band (in the high resolution EBSP space). – fit parameters are (ρ, θ).

Refined Accuracy is available as one of the standard band detection approaches within the AZtecHKL software; however, since Refined Accuracy uses the real EBSP space for the final refinement, it benefits from the collection of higher resolution, better quality EBSPs than might usually be used for routine Hough-based indexing. 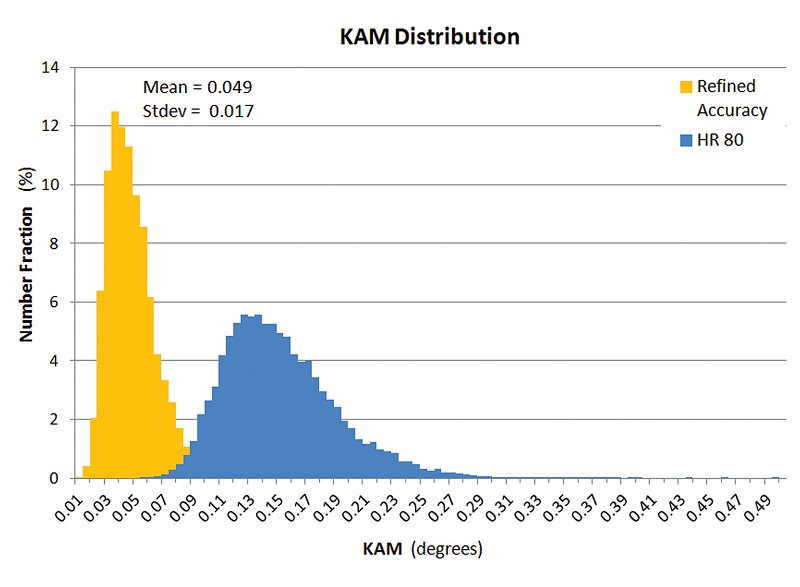 The results of applying Refined Accuracy in AZtecHKL are demonstrated in the histogram. Firstly, a single crystal Silicon sample has been used to characterise the orientation precision, as this removes complications resulting from the sample and simplifies the analysis of different band detection and calibration methods. With a single crystal, the orientation should be constant throughout the field of view, so differences in orientation from point to point are due to the variability in the measurement.

Here, the same set of EBSPs has been processed using both the conventional Hough-based method (shown in blue in the histogram) and the Refined Accuracy method (shown in yellow). The plot shows the kernel average misorientation (KAM) distribution for both datasets: this is a calculation of the average misorientation between each pixel and its neighbours in a 3x3 pixel array. It is clear that the secondary refinement used for the Refined Accuracy data has significantly reduced the KAM values, indicating a marked improvement in angular precision.

The increase in angular precision offered by Refined Accuracy enables us to use EBSD to map the small changes in orientation associated with dislocation cell structures. In the following example, a deformed and heat-treated Al-Mg alloy has developed numerous dislocation cells, typically disoriented from their neighbouring cells by significantly less than 1°. The KAM maps show the same area and are plotted using the same colour scale. Although the map collected using standard Hough-based band detection (left) clearly shows the presence of a dislocation cell structure, the subtleties of the microstructure are lost within the orientation noise. In comparison, the map collected using Refined Accuracy (right) not only shows the dislocation cell structure much more clearly, but it also resolves the subtle hierarchical nature of the cell walls, especially in the vicinity of the grain boundaries. This would allow a more in-depth examination of the dominant deformation and recovery mechanisms within this sample. 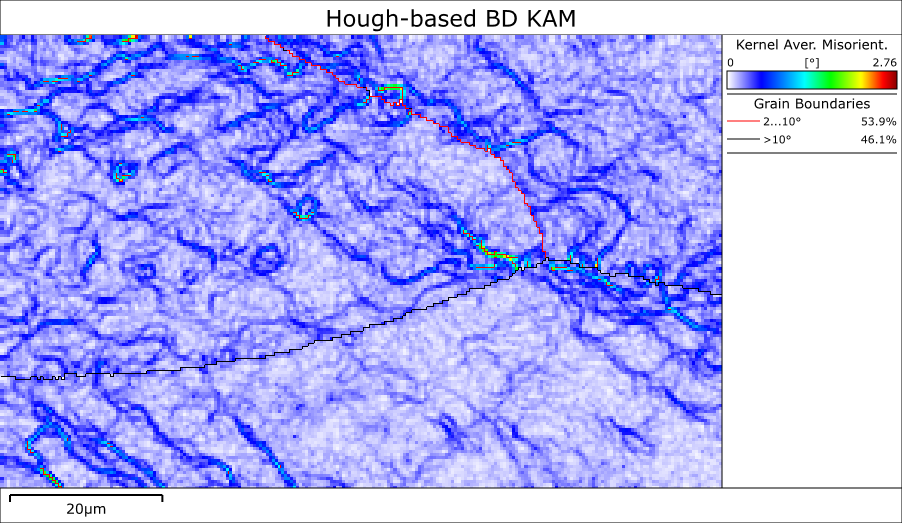 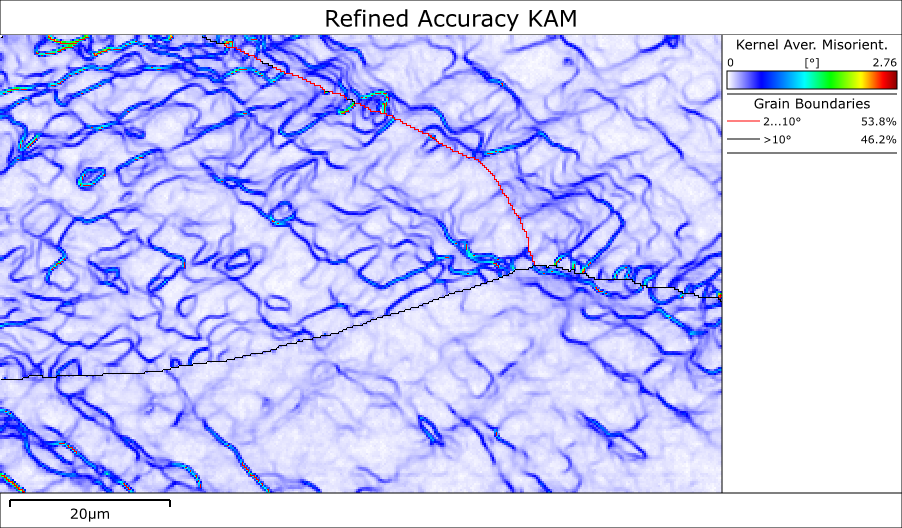 AZtecHKL
Open in a new tab